Yesterday I was with my kids at an unnamed big box store I will not admit going into. They had a gift card from my big brother (who actually made the New York Times the other day - but what's that when you've already been in Rolling Stone? I have such an interesting family) and it was calling to them.

We'd first gone into another big box store, and Jake had found his copy of the Club Penguin Elite Penguin Force. Emme couldn't find what she was looking for (and, of course, had no idea what it was anyway) so we went to another store. She found the perfect guitar, pink, with a flower on it, and was excitedly carrying it up to pay for it. All of a sudden she saw one of her friends from school and was off like a shot.

I took off running after her, yelling at Jake to follow. I was not going to be on the evening news, pleading for the return of my daughter who'd been kidnapped while out of my sight.

Turned out this nice family had rented out the local roller skating rink for the evening for their sons, and because of the holidays (or maybe their lack of friends) they were afraid no one was going to show up.

And that's how we spent the evening, faced with tables FULL of pizza and soda and cake. Turns out there were only three other kids there besides mine and the hosts'. They had three, plus my two, plus the other three- yes, that's 8 kids who had the roller rink to themselves. 8 kids - what a dream come true for them!

After about an hour, the kids ganged up on us. We had no choice, really. We'd been forced to listen to the soundtrack for "High School Musical" for the previous hour.

We made our way to the counter and got our very own...skates. 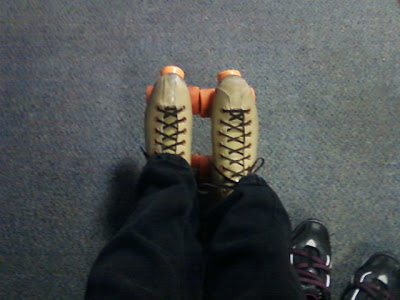 I used to skate when I was a kid. Really, I did. I was pretty good at it, too. Oh, not like my Jake is now, but the clunky four-wheeled skates of my youth didn't allow for many tricks the way his inlines do.

I tried again in my early 20s, with my friend Marilyn, in the garage of the house we were renting (I think this was before the Elvis impersonator moved in, but I'm not exactly sure anymore). I was awful. She ended up in a wrist brace (which didn't allow her to drive the night we went to the snow and I was way to scared to drive in it, but had to anyway - all because of roller skates!).

Last night I vowed I would be one of those parents skating comfortably alongside their child....ha.

Every time the skates would actually start to roll...I'd tense up. Not exactly conducive to ROLLER skating. So I basically did a roller walk. Very dorky, but safe. But that's okay. My kids haven't yet reached the age where can I embarrass them by the mere act of breathing.

It was fun, they got fully tired out (I know this because Jake actually stopped skating about 20 minutes before the end and went and sat down, and Emme had a minor melt-down), and I didn't end up in the ER. All in all, I'd say that was a successful evening, wouldn't you?

"All in all, I'd say that was a successful evening, wouldn't you?"

Oh yeah. I feel the same way every time I drive back from Eskimo Hill.

WHAT? You strapped SKATES ON? After the age of 25? ARE YOU NUTS? You managed to avoid a wrist brace/cast/concussion...kudo's! I've learned that Skates, inline,roller, whatever, usually lead to me putting my arse over my head, which, is NOT, I repeat NOT comfortable. Never fun to have enough time while falling to tell yourself "this is gonna suck..hard". However, a whole roller-rink to yourselves and a few friends? WOOHOO! Cake, pizza, soda, red dye #40, and loud music! And you retained your sanity (such as it can be for a single Mother, bless ur heart!) Impressive Annie, Impressive. I hope for a wonderful New Year for Yourself and You're brave, wonderful, loving family.
Traci, Sean, Louie 'da Kat