The post where I say butt too many times, and talk about Ender's Game

As in, put your money where your mouth is, but this relates to a movie, so I'll say put your money where your butt is. Where I paid a lot of money to put my butt in a seat. Oops, I said it again. And I will, because I like to say butt. I wasn't allowed to when my mom was alive...see, she died when I was 10, but there are still so many things every day that make me think of her. Somehow, saying butt instead of bottom makes me feel just the slightest bit naughty.

We went to the movies tonight, my teenaged son and I. This we had planned since the day he started reading Ender's Game. He came home and asked if I had read it. Of course I had, being a science fiction fan. But it was years ago, so he asked me to reread it so we could talk about it each night. It was a pleasure, and I enjoyed it more the second time round, probably because I could now critique it with one of the most important people in the world to me.

I had to stop and think about the movie visit. I know many will not go to see it, because of the strong views of its outspoken author, Orson Scott Card. Put your money where your mouth is. Live your beliefs with your wallet. I've heard a few more of these, though more don't quickly come to mind. Would I see this movie knowing how much hatred this man holds and inspires? Would I refuse to see the film to prevent him from making any more money than he already has from the book?

I chose to see it tonight with my 13-year-old son. We talked about the things that Mr. Card has said. We talked about the fact that there are people we love and care about that are the targets of some of his hatred, though I think some of that still went over my son's head.

Because I thought about other things, too. About Jesus' call to love. About my own faith and beliefs. How would I feel if an atheist chose not to visit the business I work in, because he didn't believe what I do?

Ultimately, Mr. Card wrote a tremendous story. And if he makes money from the movie and uses that to advance his own agenda, then so be it...because that's what I do with money I earn. We live in a country where we can believe things that others find absurd and even offensive. The fact that his book made it to film has got people talking. Do I judge him as he judges other? Probably. After all, part of the definition of judgment is to form an opinion, to discern.

So ultimately I am glad I got off my butt and put it in a movie seat tonight.


Have you seen Ender's Game? Will you? Let me know in the comments below.

Posted by Unknown at 10:52 PM 2 comments: Links to this post

What a difference five years make. Everyone says, "Enjoy every minute. Time flies so fast." I know they're right...but still I'm continually astounded. This was five long years ago: 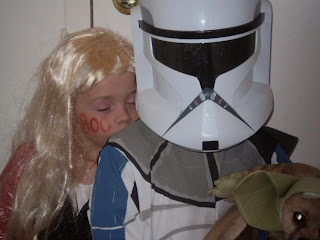 My princess was Hannah Montana, back before Miley washed her hands of Disney and delight, and traded them for flash and skin. My boy was a Stormtrooper, following his method of refusing to wear the current year's costume and ending up in the last year's. Happened every year until last, when he suddenly was "too old" to trick or treat. Also, you can't catch him in a photo with his sister, because they continually pick at each other.

This year, my sweet girl was a cheerleader, and this photo gives a hint of the woman she'll become. Visiting houses with a friend, because brother wouldn't go, and stayed home with dad. 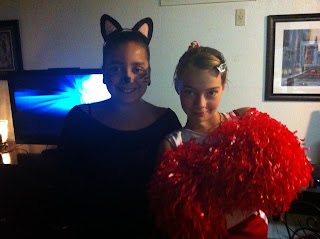 Sweet memories, old and new. I treasure them all.

The dog? He still looks the same.