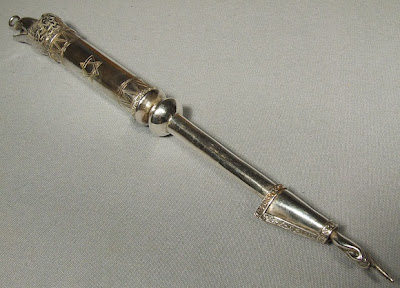 My name is Annie, and I am an orphan.

And my hair is curly, though you will rarely see it in that state. But it is NOT red, unless my hairdresser is lying to me.

So, I am not that orphan Annie.

But since my last surviving parent died when I was 10, family history has been hard to come by. Seriously, have you shared your darkest, deepest family secrets with your children under 10? For crying out loud, my mother hadn't even gotten to the sex talk with me before she died.

So what does a girl with an active imagination do? She imagines.

When I was in college, I had a kick-ass roommate named Linda. I learned a lot from her. Her family would invite me for holidays, and that was awesome. Now, getting invited to someone else's house for holidays can be really awkward, but somehow it never was with them. Her father - a Scandinavian Lutheran. Her mother - a Romanian Jew. One that auditioned for "Match Game," no less. She taught me to saute onions in butter until they were so sweet and golden they would make you cry.

I decided right then and there that I must have been Jewish in a previous life.

Forget about the fact that my mother was a lapsed Catholic and my father Russian Orthodox. Forget they had me baptized at All Saints Episcopal Church in BEVERLY HILLS, no less, because apparently, that was the thing to do.

Fast forward a couple years and I auditioned for an unnamed cola product (ahem) in Petaluma, California. 400 people showed up for the audition. I thought it would be a kick, so I was one of them. First round, second round, third round...and so it went. I looked around, and there were six of us left.

Six. Are you kidding me? I knew in my heart that if I had made it this far, I had it made.

"No, thank you." I stared at the judge, stunned. "Can you tell me what I could do differently next time?" I asked.

"You are too ethnic looking." I continued to stare at her, my hazel eyes surrounded by milk white skin that freckles if I am out in the sun too long. "Ethnic?"

I didn't touch a %^&*( product for 10 years. Want to know how many subsidiaries they have and what they actually make? Just ask me, I know.

Eventually, I walked away, puzzled.

But somehow, I was always drawn to Judaism. Through the years, I have attended numerous Holocaust remembrances. Poured over Jewish cookbooks (hey, I love the food). Read every Faye Kellerman book written, because I love the way she tells of the traditions.

A month or so ago I got an email from a nephew I rarely hear from. He had been contacted by a guy in Russia who thought we might be related. A Google Translate correspondence began that day. We compared relatives, pictures, old articles.

He is, I believe, my first cousin, twice removed. He lives in Ufa, in the Republic of Bashkortostan in the Russian Federation. And I have learned much about the family I never knew. He is descended from the brother who stayed behind when my father, two of his brothers, and his sister left Moscow.

And one of the things he told me?

He was baptized in the Russian Orthodox Church because that was the thing to do ...if one wanted to succeed in Tsarist Russia, one did what one must.

So, because of my patrilineal descent, I would be considered a Jew in Reform Judaism. Not by the Conservatives or the Orthodox, who only recognize matrilineal descent. Who knows about my mother - she was born in Claremont-Ferrand, France, and her maiden name was Wilson. Right.

It just amazes me that I always felt this pull, this fascination and commonality with the Jewish people, and it turns out to have basis.

So now what? Do I learn to shukkel? Do I join J-Date?