Yes, if you're a Facebook friend, you'll know that's the song I want at my funeral. Hopefully, the events of today won't precipitate that.

I've been afraid of heights since I was a child. A tumble down the stairs may have been the trigger. It didn't get too much in my way when I was growing up...I do remember a bus ride to camp that traveled down a steep mountain road and terrified me. It wasn't as bad as the latrines once we actually got there. Still can't stand the scent of Pine-Sol....

I mostly avoided instances that would make me fearful. This came in handy in my early twenties, as I could ask the cute guy next door to come over and change the light bulb I would have needed a step-stool for. I spent a lot of time helping build sets when I was doing theater, but I could never get more than a couple steps up the ladder before my heart would pound and time would stop.

When I was dating my now ex-husband, he invited me to the coast so he could learn to go abalone diving. We went with one of his co-workers' families. Early in the morning, they were going to dive at Elk. I wanted to go along and watch. Co-worker said, "It's a bit of a walk down to where we dive." Okay, I got the walk part - apparently my mind just blanked out the DOWN.

It was straight down a cliff steep hill. Treacherous. Some divers had actually left ropes, tied to trees above and dangling down, to assist with the climb down. I made it, choking back tears, and was pretty proud of myself.

The guys spent a few hours diving, and I sat on the rocks watching the waves and waiting for them to reappear after each dive down, until they finally came out of the water with their catch.

It was time to return. Just one problem that I could see - the tide had come in, and we had to wade through water that was 4 feet deep just to get to the cliff steep hill again! Of course, the others were in wet-suits, and I was in jeans....argghh.

So that's how I found myself, soaking wet, cold, and scared, attempting to climb back up to reality.

The ropes were gone.

Apparently the divers who left them there didn't intend for them to be a permanent help, just a TEASE! If I ever find them, I will kill them.

It took me 45 minutes to make it up to the van, with my now ex-husband (gotta get that man a nick-name) encouraging me along the way. I was petrified. I actually told him to just leave me there to die. Of course, he didn't. And neither did I. I made it all the way, inch by inch, and felt pretty proud of myself.

And the fear subsided a bit. I've worked on conquering it since then. I can actually ride on a ferris wheel - although I freeze when we're at the top, afraid to talk or move because THE POWER OF MY VOICE COULD TIP THE WHOLE THING OVER. Really. I have that power.

So I've decided to do something really different today.

I'm going to join the circus. Okay, okay, just for a couple hours. I'm going to the Circus Center in San Francisco to take the Flying Trapeze class.

Wish me well, say a prayer, and wait for pictures. Because I AM GOING TO DO THIS. Hoping that it's actually Johnny Depp who'll be there to catch me: 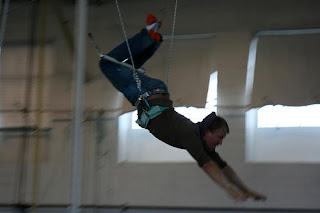 Wow Annie, now that gives a whole 'nuther meaning to "facing your fears." Have a great trip.