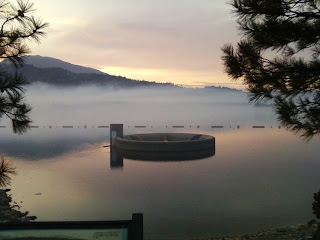 We always stop here - my kids are endlessly fascinated, as am I. We've never actually seen the water spill over...it's very low now. No chance of that. It's right next to the Kennedy Memorial. President Kennedy dedicated Whiskeytown Dam during his last visit to California, only seven weeks before he died. We love to look over the lake, and I imagine what it must have been like the day JFK stood there.

My mother was a Kennedy lover....I remember the day he was shot (yes, I'm that old). I was home sick from school that day with German Measles....I guess if anyone gets them anymore, they don't call them that. Not PC. Now it's Rubella, and preventable. We had quite an oubreak in town - the first grade teacher caught them, and was pregnant. Nine months later she gave birth to a deaf child. I'm a believer in vaccinations.

My mother cried when saw saw the news about JFK. It seemed to me, a kindergartner, that the whole town was crying for days. I know we've never seen a president since that's engendered that kind of emotion. I'm saddened and afraid that people would gloat if some of our recent presidents had been killed.

Last night we were leaving a benefit for a dear friend with cancer. Just at sunset, we rounded the corner from the NEED camp by the dam and saw this. We weren't the only car to pull in, but I was the only one without a camera - except the one on my cellphone. I never thought this photo would turn out.

Smoke from a prescribed burn hung over the water. The sky was just beginning to turn color, and was reflected in the lake.
Posted by Unknown at 5:18 PM

Wow, what a great photo. And from a cell phone?