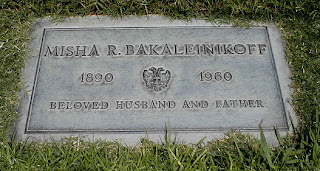 I've been thinking about my father a lot lately. Thanks to Google Alerts, not a week goes by when I don't have something in my emailbox about my father or one of his brothers. TCM is running some kind of marathon of the old RKO films, so Uncle Costia's been hitting the alerts this week. Last week, it was Loren Maazel's upcoming retirement from the New York Philharmonic (he studied under my Uncle Volodya).

My father died when I was two years old. I don't remember him. My siblings always said, though, that I have some of his mannerisms and patterns of speech (strange - since I'm a born Angeleno and he spoke with an always thick Russian accent). I have pictures of him, back when he was a young man. He was an old man by the time I was born - a happy accident, they called me. He had just turned 68 the week of my birth, and my lovely mother was 39. He spent hours composing and playing, with me in a bassinet at the end of the piano bench.

Once, my sister played a recording for me, without telling me first. I knew in an instant that it was him speaking. I never for a moment thought it might be Uncle Costia or Uncle Volodya, though they both spoke their own versions of fractured English.

From him, I gained a love of music, and a sensitive ear. A fascination for all things Russian. I have his nose and his chin. An inexplicable attraction to men who make me laugh. I think that he must have been the first.

He wrote a song for me when I was an infant...I know the title - "Sweetheart, Baby Ann." How I wish I knew the lyrics or melody still.

On July 31, 2007, one of Ray Harryhausen's great B movies, "20 Million Miles to Earth," was re-released. Mr. Harryhausen always wanted to make it in color, but didn't have the budget for it, so it's now been colorized. Most importantly to me, there is a 22-minute documentary on disc two. "David Schechter on Movie Music's Unsung Hero." Mr. Schechter is a talented and intelligent man - I've spoken to him several times on the phone, and count him as a friend, though we've never met. He has a company called Monstrous Movie Music, and releases a new disc now and then that he will share with me......

You see, according to Mr. Schechter, movie music's unsung hero is none other than my father, Mikhail Roman Bakaleinikoff. Mischa. My Отец.
Posted by Unknown at 11:34 AM