Do Not Stand Silent 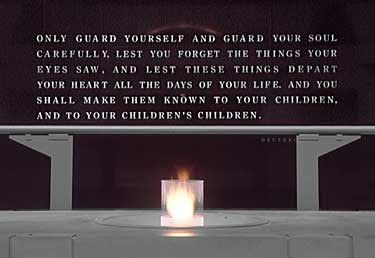 “If you saw a fanatical mob pillage and burn a church or synagogue you would not stand silent...”
— Thomas E. Dewey in The New York Times, November 12, 1938, p. 4.
The United States Congress established the Days of Remembrance as our nation's annual commemoration of the Holocaust, just as the United States Holocaust Memorial Museum is our permanent living memorial to the victims. This year Holocaust Remembrance Day is Friday May 2, 2008. The Museum has designated "Do Not Stand Silent: Remembering Kristallnacht 1938" as the focus for the 2008 observance.

Seventy years ago, on November 9-10, 1938, the Nazis staged vicious pogroms (state sanctioned, anti-Jewish riots) called Kristallnacht against the Jewish community of Germany. Initially a cynical reference to alleged Jewish wealth (hence the literal meaning, “Night of Crystal”), the name Kristallnacht (now commonly translated as “Night of Broken Glass”) refers to the untold numbers of broken windows of synagogues, Jewish-owned stores, community centers, and homes plundered and destroyed during the pogroms. For over 48 hours, violent mobs—made up of Nazi Party officials, Nazi storm troopers, and Hitler Youth dressed in street clothes and joined by some civilians— rampaged through the streets of German cities assaulting Jews and vandalizing their property. They destroyed hundreds of synagogues, setting many of them on fire. Under orders to let the fires burn but to prevent the flames from spreading to other buildings, firefighters stood by. Antisemitic mobs smashed shop windows and looted thousands of Jewish-owned stores. They desecrated sacred artifacts such as Torah scrolls and ravaged Jewish cemeteries. About 100 innocent Jews lost their lives in the violence.

Nazi officials proclaimed the Jews responsible for the riots, and imposed a collective fine of one billion Reich marks (about $400 million at 1938 rates) on the German-Jewish community. Acting on orders from Gestapo (secret state police) headquarters, police officers did nothing to prevent the destruction. Instead, they arrested nearly 30,000 Jewish men aged 16 to 60 and deported them to concentration camps simply because they were Jewish. There the SS subjected them to brutal treatment. Most of the men were released over the next three months on the condition that they begin the process of emigration from Germany.

Many ordinary people looked on as Nazi mobs assaulted Jews and Jewish-owned property. Most disapproved but took no action. Some, especially young men, were drawn to the wanton violence and plunder and joined in the destruction. Some few individuals attempted to provide aid and support to the victims of the riots. Their actions illustrated the limits of Nazi antisemitic propaganda and were a reminder of the many opportunities for individuals to show compassion and concern, without necessarily endangering themselves or their families.

One of the most striking actions on Kristallnacht was that taken by police Lieutenant Wilhelm Krützfeld, the commander of a police precinct in Berlin. In the early hours of November 10, 1938, Nazi hooligans prepared to set the Oranienburger Strasse synagogue on fire. Lieutenant Krützfeld rushed to the scene and ordered the mob away. He explained that the synagogue had been a protected historical landmark for decades and, drawing his pistol, that he would uphold the law requiring its protection. Krützfeld ordered the fire brigade to stand guard to ensure the integrity of the synagogue. Additionally, in at least three German villages (Warmsried, Derching, and Laimering) civic leaders and local clergy acted to stop the riots against Jews in those villages. In Leipzig, sacred Torah scrolls were saved from destruction and desecration when an anonymous phone call warned the community of the impending violence. Long thought lost, the scrolls were discovered in 1998 hidden in the roof of the library at the University of Leipzig.

During the pogrom and its aftermath, some sympathetic officials quietly informed Jewish friends that their names appeared on lists for arrest. Jewish men across Germany sought desperately to hide. Some ordinary Germans and Jews holding non-German passports (who were exempt from the police action) offered them sanctuary and assistance. Ephraim Handler, the leader of the Jewish community in Magdeburg, for example, escaped arrest. With the help of friends, he was able to book passage on the train to Berlin and back, thereby avoiding arrest. Famed German boxer Max Schmeling hid the two teenage sons of his Jewish friend, David Lewin, in his rooms at the Excelsior Hotel in Berlin. Other Germans made clear their disapproval of the pogroms. Father Bernhard Lichtenberg, a Catholic priest at St Hedwig's Cathedral in Berlin, closed each evening service after Kristallnacht with public prayers for Jews and those held in concentration camps.

Kristallnacht was a turning point in history. The pogroms marked a shift from antisemitic rhetoric to violent, aggressive anti-Jewish measures that would culminate in the Holocaust—the systematic, state sponsored murder of Jews. The violence shocked the world that had been hopeful for peace in the aftermath of the Munich agreement less than six weeks before. As President Franklin D. Roosevelt of the United States commented in a press conference on November 15, 1938, “I myself could scarcely believe that such things could occur in a twentieth century civilization.” He recalled the U.S. ambassador to Germany for consultation.

Right now there is a genocide in Darfur. Once you've heard about it, can you really stand silent? I'm fasting for Darfur right now, and sending the money to Gabriel.

Annie, your blog does my heart good. I appreciate deeply your willingness to share, and the clarity with which you share your thoughts. I am bookmarking your page. I will be reading here again.