I must love my kids 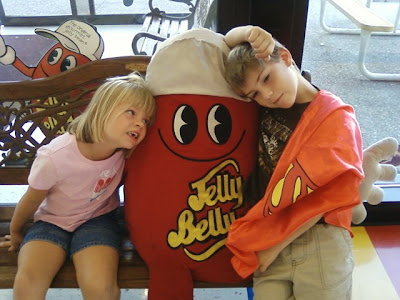 School is starting Monday. The new backpacks and lunch bags are purchased, the first-day outfits already picked out. Meetings held with teachers. So, what's left for a parent to do?

Take the kids to 6 Flags, of course! Normally, this is the week we would have camped in Felton, but I was a bit leary with the fires. Add that to parent-teacher orientation both Wednesday and Thursday, and and injections in two of my facet joints (which, honestly, I didn't even know I had until a couple months ago) on Wednesday. 6 Flags is close, and we had coupons!

It was really fun, considering I only felt like throwing up once, and Emme only a few times. Jake rode the Hammerhead, about which he proclaimed, FAMILY READING WARNING, "I'm not doing that again. I don't like hanging upside down that much, because it hurts my nuts." He pronounced the Boomerang, "Awesomely sweet!"

He is on such an incredible precipice between little boy and big boy right now. He had just as much fun riding the Thomas the Tank Engine train as he did riding the Boomerang. He must have told me 50 times that I am THE BEST MOM EVER! Even though I left the bag with his souvenirs in the parking lot at the Jelly Belly Factory (don't ask). He's sure someone turned it in, and when I call on Monday, they'll cheerfully agree to mail it to us. I actually offered to drive back to Fairfield to try to find it (we realized what I'd done about an hour away) but after I told him it would delay our return to Redding to a time that we'd have to wait until Sunday to pick up Rex the Wonder dog, he said immediately that he'd rather get Rex and take his chances with the bag.

Emme had a bit harder time. She loved the first water ride we went on. When I talked her into the second one, telling her it looked even calmer than the first, she agreed. I had NO IDEA that we would be bounced around, and run directly under a huge waterfall....really, I didn't. She finished the ride saying, "This - is - just - STUPID." She was broken-hearted when her brother beat her at the only carnival type game I let them play. Anything that spins makes her sick. She's too short for half the family rides, but she feels like she's too big for the "baby rides." She LOVED one particular ride - the Congo Queen....she shares her brother's affinity for the word sweet. I wish I wasn't on the ride with her, so that I could have gotten a picture of her with her arms raised, a huge smile on her face, shouting, "This is SWEET!"

Jake was disappointed that there were three rides he wasn't allowed on, but he is certain that he'll grow the necessary three inches by the next time we go.

A word to the wise - if you ever stay at the Courtyard by Marriott, located directly across the street from 6 Flags - ASK FOR A ROOM AWAY FROM THE POOL. Our room was on the second floor, directly off the pool - WHICH IS OPEN UNTIL 11:00 P.M.! Just try getting kids to sleep at a decent hour because it's two days before school starts, while they can hear 15 other kids laughing and playing at the pool.

We listened to the "Alvin & the Chipmunks" CD every moment we were in the car. Every. Moment. Chipmunks. Yeah.

The trip back could have been worse. Your kids could instead be enamored of Pat Boone's "In a Metal Mood."