Stick it to me 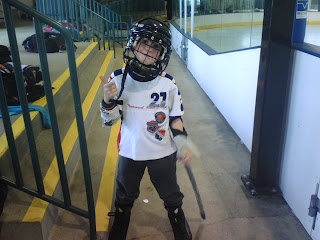 Have you ever bought a hockey stick? I hadn't, until today.
My sweet Jake - he'll be 8 in 2 1/2 weeks - started a "Skating for Hockey" class yesterday. He's always been interested in the sport - his dad grew up playing ice hockey in South Dakota, and has regaled us with stories. He's been a natural on skates - the first time we put skates on him, he just took off....no lessons, no nothing. It was as if he were born to skate.
Anyway, he was leery about attending the class yesterday. He wouldn't know anyone, he was right in the middle of playing Lego Star Wars when it was time to go, just your basic fear of the unknown. I picked him up a mere two hours later and asked how it went. "IT! WAS! AWESOME!"
We've tried soccer with him a couple times - no interest. He likes to play on his own, kicking a ball around, but didn't like the team stuff. I thought that was it - he's not a team kind of guy. That wasn't it - he just wasn't a soccer kind of guy.
So today at lunch I hustled myself over to the local second hand sports store and purchased what the guy told me would be just fine....did you know you have to cut the end off yourself? So I went over to my ex-husband's house and borrowed his handsaw.
If you see me tomorrow missing any fingers - you'll know why.
Posted by Unknown at 12:42 PM