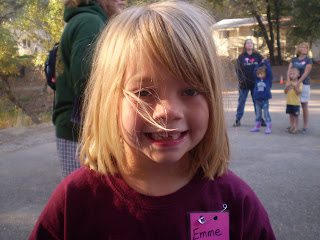 I could write about my kids every day. They are simply amazing. The challenges they've each been through can be shocking. I have a medical file on each of them, from their times in NICU, and it makes me cry to think of the pain they went through. Emme had physical therapy until she was a year old. Of course it was painful - have you ever been through physical therapy? Emme's therapist told me that the pain was probably equal to that I felt when I underwent therapy to release a frozen shoulder. I prayed, I cried, I swore....but I understood why the therapist was causing me pain. My poor child had no idea....she could only cry. It broke my heart and I was terrified that she would blame me always.

Emme was born with congenital muscular torticollis, and because she was in foster care, and the pediatrician didn't pay much attention to her, it went untreated. By the time she moved in with us, her head was badly misshapen (plagiocephaly). I don't take no for an answer when it comes to my children - I'm like a momma bear. I didn't give up. Every week I called the pediatrician, until he could get approval for a physical therapy evaluation. Finally, we were able to start therapy...a wonderful woman from the Moose Lodge (of all things) came out to the house every week.

I have so much respect for fraternal organizations that provide social service help....Emme was caught in the gray area between Medi-Cal and private insurance...we were unable to cover her under my ex-husband's insurance until the adoption was final (yes, I know that's illegal - but what..he's supposed to argue and lose his job?). But the Moose covered it free and clear.

Our therapist worked with Emme an hour a week, but more importantly, she trained me to do the therapy - 6 times a day, 7 days a week. Pulling and stretching and causing pain. The two of us would cry together.

And every 45 minutes while she slept I'd awaken to move her, to change her position, to massage her sweet little head and try to get it to regain it's normal shape.

Mothers would tell me they couldn't do what I did - they couldn't cause pain to their child. It was one of the hardest things I've done, but I had to remember that what I was doing was for her good. That it would allow her to hold her head upright, to prevent neck pain and problems later in life, that it would allow her to have a normal appearance.

And it worked. On her first birthday I had a photo taken of the back of her head, and gave it to her physical therapist, to show how lovely and straight she held her head. It was a success.

Emme is going through so many changes right now - and I have to remember that we'll get through each challenge as we did that one...crying together, praying, and doing it together.

At least until she's a teenager, right?
Posted by Unknown at 9:30 PM

My God, I can't imagine going through what you went through. It was almost too much for me to watch my son have stitches removed when he was three.